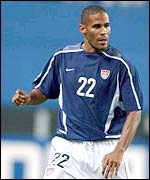 Given all of the Rhinos injuries on defense (their top 4 central defenders and their starting left back were out after halftime), you would have expected the Rhinos to make a stop gap move such as this.

Hopefully the talk that the Rhinos will be bringing some players in for looks during training this week will lead to some reinforcements being signed.

Goodness knows that the defense can use any help it can get at this point.

The Minnesota Thunder have yet to finalize anything and nothing is signed with Tony. However, the Thunder's GM did say to check back on Tuesday.

The less said about Saturday night, the better

The Rhinos injury situation turned borderline comical when Scott Palguta pulled a muscle coming out for the second half. With Aaran Lines, T-Bone Bonseu, Hector Zapata, and now Palguta down with muscle pulls, there are fans that are wondering if the Rhinos are doing something wrong.

Although, with the type of injuries that Scott Vallow, Kenney Bertz, Matthew Delicate, Nate Craft, and Mike Ambersley have struggled with, there is an element of plain bad luck. Add in the absences of Hamed Diallo (visa issues) and John Ball (Pan-Am Games), and you wonder what can happen next?

With the "Bark in the Park" promotion scheduled for Saturday, I'd be worried about a dog getting loose and biting a player. Seriously, would that surprise too many people at this point.

And here is my three pronged attack to right ship:

1) Sign Craig Demmin to provide depth on defense. John Wilson wouldn't be a bad guy to look at either. If the Rhinos cut Zapata loose, that will give the Rhinos two open roster spots that can be used to help shore up the defense.

2) Start Rey Martinez and play him until he drops. Danny Kramer played OK versus Minnesota. However, Martinez was a difference maker yet again and the Rhinos need him on the field as much as possible. If he can only go 50, 60, ot 70 minutes, that's fine. Let him go as long and as hard as he can and then sub him out.

3) When Scott Vallow goes to the doctor on Wednesday, get him cleared to play on Saturday. It's a risk, but this team needs Vallow back in net as the Nuno Santos idea was obviously a poorly formed one. It's great that Jose Mourinho gave the guy an endorsement, but it's obvious to me that Santos is not the shotblocker the Rhinos need to make up for the holes they have on defense right now. Vallow is that guy. And my guess is that he could have played on Saturday (even with one arm) and he likely would have gotten the Rhinos at least one point, if not the full three.

Beckham & Blanco make their debuts over the weekend

Blanco's debut with the Chicago Fire isn't getting as much press as Beckham's LA debut , but he did score a goal and is 100% fit.

Luis Bueno thinks Blanco can have a big impact on MLS. Personally, I liked what I saw out of Blanco yesterday. He was active, got a lot of touches on the ball, and was almost trying too hard. And to me, that's a good thing when you are talking about a highly paid Designated Player.

Now as far as Beckham goes, the coverage has been insane, as expected. There have also been the critical pieces, such as Richard Deitsch at SI.com, but also the more even handed pieces such as Jonah Freedman and Grant Wahl had on SI.com

My favorite has to be at This Is American Soccer.com, if only for the Posh Spice-Willy Wonka picture.

In the end, I don't care how many stars came out on Saturday night in LA. Like Beckham himself said, this is about 5 years and not one night.

So let's hope that Beckham's left ankle heals quickly and then he can be the difference maker that Juan Pablo Angel has been for the Red Bulls, Blanco was for the Fire, and Schelotto was for the Crew last night.

Off the field news and notes:

- There are some rumblings of a $100 million MLS stadium project for an expansion team in the metro Philadelphia area. With MLS having two spots open in their plan to get to 16 teams by 2010, a team in either NY City or Philadelphia would seem like a perfect fit.

- The Freddy Adu to Europe rumors are hot and heavy after he missed last evening's friendly between Real Salt Lake and Everton.

- Cleveland's MLS bid is back in the news and a sports writer from the Plain Dealer is talking to Drew Carey, Cleveland's most famous native soccer supporter. With Soccer Sam hearing rumors that Drew is looking to buy a soccer team for himself, is it a coincidence?

Perhaps someone in Rochester should try and become the local version of Larry Quinn, the man who convinced Tom Golisano to buy the Sabres and keep them in Buffalo.

Could someone convince Drew Carey to forget his beloved Cleveland and instead spend a lot of money to take Rochester to MLS? It certainly is fun to dream about.