KICK THIS ! THE SOCCERSAM SHOW

***Kick This has taken a radio break due to COVID19. We will be back soon!

Kick This! is heard on iHeart radio worldwide and Fox Sports AM 1280 Rochester.

Kick This! the SoccerSam Show has been a soccer institution since 1995 featuring key guests and hosts covering the great sport of soccer.  Rich Jones continues as the original producer of the show and Mike Moran continues as the original technical director. Dante Cilino is the director of social media. SoccerSantino and SoccerSalvatore are SoccerSam's body guards.  You can listen live to Kick This! every Saturday from 11-12pm worldwide on iHeart Radio, SoccerSam.com, and on Fox Sports 1280 Rochester. Click here to Kick This archives.

Kick This ! is brought to you by Salvatore's Old Fashioned Pizzeria, Palmer's Direct to You Market, Donuts Delite, Arthur Treacher's, Speedy Slice Pizzeria, 1872 Cafe, and the Rochester Lancers.  Feel The Kick... for life !

SoccerSam was born and raised in Rochester, NY and fell in love with the great game of soccer in 1970 at the age of 10. Sam began playing that year with the Rochester Juniors and his uncle Al Oliveri took him to his first Lancers game. Sam has been an avid fan of Indoor and Outdoor American Soccer ever since and continues to play.

IFSL 1980-2000: SoccerSam took over as commissioner of the Irondequoit Fall Soccer League (IFSL) in 1980 with the help of his wife Linda. This 20 team league offered Fall soccer to some of the best former Pro players, college coaches and this areas best local players. In 1994, an all-star team traveled to Agropoli, Italy and won an adult tournament. SoccerSam and his board organized several international trips. In 2000 Sam & Linda opened America's first Soccer Themed Italian resturant. SoccerSam's Pizza Pasta Cafe opened in Webster NY.

SoccerSam TV Show 1994-2006: In 1994, SoccerSam started America's first weekly soccer TV show called "The SoccerSam Show" on Irondequoit cable access. This weekly show featured the IFSL all stars, trips to Italy and the first Rochester Lancers reunion game and award banquet. The show covered local youth and adult soccer, including section V soccer and local teams competing in the US Open Cup. The show went weekly on the WB network. Sam interviewed some of the greatest names in the history of soccer on this show including Pelé and Mia Hamm. 1995: The Rochester Rhinos were introduced and the focus of the show became making the Rhinos a success. The Rhinos became the most successful team in the history of American Soccer and many attribute the success of the team to the show.

Kick This! The SoccerSam Radio Show 1995-Present: This weekly radio show started in 1995 and several local soccer celebrities helped host the show. The show covers local and Professional indoor & outdoor American Soccer! Jeff DiVeronica of the Democrat & Chronicle has hosted this show with Sam for years, James Weise, Rich Randall, Andrew Battisti, "The Dean" Alex Loj, "The Don" Don Lalka and others helped host the show in the past. Rich "Kicker" Jones is the producer and Mike Moran is the Webmaster.

Rochester Rhinos 1996-2009: SoccerSam was the assistant to the GM Chris Economides since day one of the Rochester Rhinos. Sam took care of selling tickets, sponsorship, trades and most of the game day ideas for the early days of the Rhinos. Sam was part of the Rhinos radio team for years and introduced the Post Game Call-In Show. The Rhinos played at Frontier Field from 1996- 2005 and became the most successful soccer team in history under the ownership of Frank Duross, Steve Donner & Chris Economides. SoccerSam and Chris Economides had been friends since High School. In 2006, both men ventured to Cary NC and helped bring Pro Soccer to Cary North Carolina with the Rail Hawks. In 2008, under new owner Rob Clark, Sam became the Team President and helped rebuild attendance, sponsorship sales and new concessions. 2008 & 2009 became the only successful years off the field at the new soccer stadium. Sam and Rich Randal brought the Frontier excitement and feel to the new stadium. In July 2009 Sam had life changing surgery and was never asked to return to the Rhinos.

Rochester Lancers (Indoor) In 1995, SoccerSam purchased the Rochester Lancers name and logo as part of his soccer memorabilia collection. In 2010, SoccerSam started negotiating with the Chris Economides of the USL to be part of the new indoor I-League. The USL struggled to attract teams to the newly formed I-League. At the 2010/2011 MISL Championship game in Baltimore, SoccerSam convinced MISL commissioner David Grimaldi to meet with the USL and bring current teams. 2011/2012 the new MISL under the USL banner was launched with 4 existing MISL teams and 3 new I-League teams. SoccerSam decided to use his beloved Rochester Lancers name and logo for this new indoor MISL team.

SoccerSam brought in lifelong friends to help with this venture. On the ownership side, Sam brought in local businessman & former minority owner of the Rhinos, Christopher J. Wilmot, John Coraggioso, a longtime franchisee in the Salvatore's Old Fashioned Pizzeria chain; local businessmen & owners of over 30 Dunkin' Donuts locations Luis Ribeiro & Dom Vieira; and CPA Steve Stokes, all lifelong soccer fans. For social media & internet support, he brought in Mike Moran of Spinning Webs, who helped create the Rochester Rhinos web site. Rich Randall, who had worked side by side with Sam in 2008 and 2009 as they helped re-launch the Rhinos with Rob Clark was named VP of Soccer Operations. Mike Moran, Patty Powers, Donna Waasdorp, Kayla Klark Kent, Lyndsay DiMeo, Ashley Maria King operated the day to day with Sam & Rich with several amazing college interns.

Several friends and former Rhinos staff members volunteered to help Sam with the indoor Lancers. Jill Rizzo, John Catalano, Joe Giuliano, Rocky Perrotta, Phil Mercato, James Weise and Eric Trendel all helped with the game day. Patty Powers handled the marketing as she had been for the past 18 years for all of Sam's projects.

The indoor Rochester Lancers began play in the Fall of 2011 at their home field the Blue Cross Arena at the Rochester Community War Memorial and played three seasons in the USL owned MISL and one season in the MASL.

In May 2016, Ed Hale founded the IPL - Indoor Pro League - and named SoccerSam Fantauzzo its first Commissioner. Months later SoccerSam helped negotiate the return of teams to the MASL for the 2016/2017 season. The Blast won the championship! SoccerSam still holds the record for the shortest reign as a commissioner of a pro sports league.

Rochester Lancers (Outdoor) In April, 2017 SoccerSam was approached by Marc Mandell, Nick Mojsovski and Doug Miller to join the NPSL Rochester RiverDogz. The name and logo was changed to Rochester Lancers. Also in April 2017, the New WNY Flash joined the UWS league and needed a travel partner. SoccerSam & Ashley Maria King introduced the Lady Lancers in less than 30 days!

The outdoor Rochester Lancers and Rochester Lady Lancers began play in the spring of 2017 at the Charlie Schiano Sr. Field at the Aquinas Institute in Rochester. The women's team is coached by Sal Galvano & Loren Inglese in the United Women's Soccer league. The men's team is coached by Rochester soccer legend Doug Miller and plays in the National Premier Soccer League (NPSL). Adam Schwartz and Rey (Boom Boom) Martinez were the assistant coaches. Marc Mandell serves as the GM/Owner of the men's Rochester Lancers, Nick Mojsovski assistant GM/Owner. Loren Inglese was the GM of the Rochester Lady Lancers in 2017.

Ashley Maria King serves as the VP of Operations of both teams.

For the 2017 season, the NPSL Lancers record was 6-4-2. The squad missed the playoffs by a single point. The Lady Lancers went winless in year one.

On 2/1/2018, Kayla Klark Kent rejoined the Lancers as Director of Soccer Operations.

In 2019 the Lady Lancers went 3-5-2 under coach Sal Galvano.  The Lancers outdoor team went 7-3-2 and made the playoffs under coach Doug Miller.

The Rochester Lancers joined the MASL2 for the 2018-2019 season. Doug Miller returned as the Head Coach with his assistants Adam Schwartz, John Berardicurti, Marc Sotile and Marcelo Moreira. The first year team went 8-4 and won the eastern division title. The Lancers lost in the semi finals in California and ended the season in 3rd place.

The team then joined the MASL in the 1st division for the 2019-2020 season. The MASL is the highest level of indoor soccer in America. The team continued to sell out each home game at the Dome Arena. Several of the M2 players joined Doug Miller and his staff for another home sell out season. Covid hit and the season ended abruptly or the Lancers could have won a championship with a record of (1-21). The team was led by Anthony Rozzano in points with 19 on the season. Original 2011 Indoor Lancer, Gary Boughton announced his retirement at the beginning of the season. We ended the Final 4 tour on March 7, 2019 with a pre game ceremony in honor of Gary, his amazing goal and a victory against the Kansas City Comets to cap off his soccer playing career. The team also honored 20 members that had been with the club since the beginning. 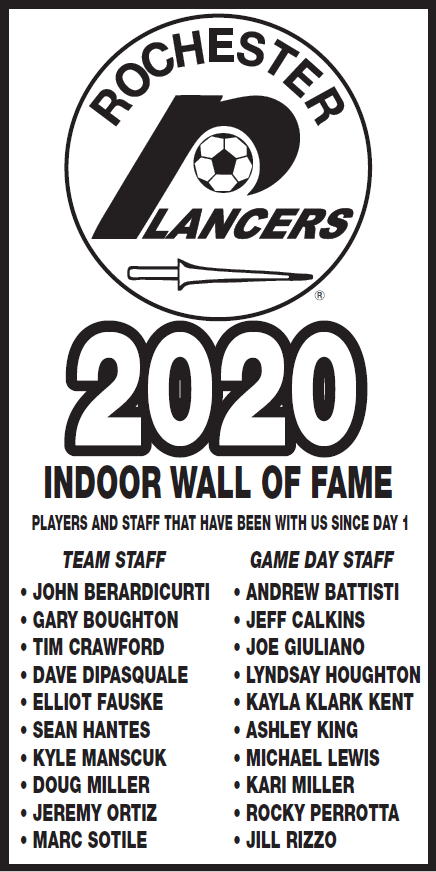 2021 Indoor Lancers will not play the 2021 indoor season in conjunction with the league's COVID-19 Voluntary opt out policy. The Lancers decision to not play is joined by the rest of the Eastern Division teams in the MASL.

2021 NPSL & UWS teams have returned to the field at Aquinas Institute after a cancelled 2020 outdoor season. Marc Dall is the UWS Lady Lancers new head coach and Doug Miller has returned as the NPSL Lancers head coach.

2022 UWSL: The Rochester Lady Lancers returned to Aquinas Institute under new leadership. Kayla Kent-Moreira became managing partner and Adam Schwartz took over as the head coach with his assistants Michelle Valentino, Tad Valentino and John Berardicurti. The Lady Lancers went 7-1-2 on the season and were the Penn-NY Division Co Champs!

Salvatore's Old Fashioned Pizzeria: Salvatore "SoccerSam" Fantauzzo is the Founder and CEO of Salvatore's Old Fashioned Pizzeria. In 1978, he took a High School project and opened the first Salvatore's location. Today there are over 30 locations throughout Monroe County including outlets at Frontier Field, Dome Arena, Glacier Ridge Sports Park and the Greater Rochester Airport. The Salvatore's Pizza Family employs over 1,600 Rochesterians. SoccerSam also helped recreate the Donuts Delite brand in 2009 and refurbished the Rochester landmark building at Empire Blvd. & Culver Rd. This is one of the only pizzeria/donut shops in the country.  In 2014, he acquired the franchise rights to bring Arthur Treacher's Fish & Chips back to the Rochester area. Today several Salvatore's locations have dining rooms with full bar service. SoccerSam went from being a part time professional wrestler, "Dr. Love" to one of Rochester's Top Pizza Franchisor's.