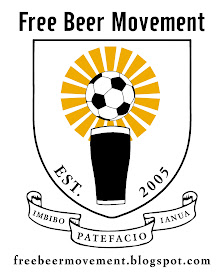 It's a relatively slow news day and my butt is dragging due to a serious lack of sleep.

So, here goes my weak effort for today:

- If you want to get a cool Free Beer Movement sticker , introduce someone to soccer and send the story in.

- I think the Free Beer Movement should raise money to send care packages to the USMNT Blog staff.

- If the US does indeed land the 2018 or 2022 World Cup , it will be a decent length roadtrip beyond NY & Boston for US Supporters here in Western NY.

- No love for Cornell grad Scott Palguta in an article that talks about Ivy League grads in MLS ?

- Ridge Mahoney does a piece for SI.com that looks into the Waldo as U-20 assistant coach news.

- I'm sorry, but there are some bad names on the list of potential names for the new D2 team in Minnesota. Personally, I wrote in the Minnesota Ice Fishermen.

- Peter Wilt isn't a believer in the Fire's new head coach yet.

- Troy Perkins has written a good bye letter to his fans in Norway and apparently he wants to return to MLS for family reasons per Steven Goff.

- Sigi Schmid gives Philadelphia some tips ahead of tomorrow's draft. SBI.net has a look at some of the top combine performers.

- The Original Winger takes a look at the ongoing issue of the financial state of Manchester United.

- If you want to be the Carolina RailHawks COO/GM, update your resume and check this out.