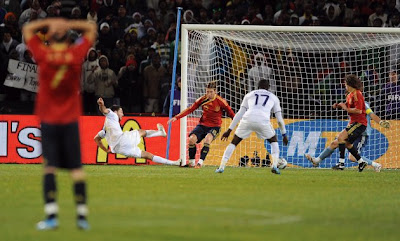 USMNT Blog - Headlines from around the world

The Kartik Report - How the English press covered the match

What is there to say a day after one of the biggest non-World Cup wins in US Soccer history?

Some people said that the US needed to play tougher competition in meaningful matches after what happened in the 2006 World Cup.

Well, the US just beat the #1 team in the world, the reigning UEFA champions, a team with a world record 15 game winning streak, and a team that was one game away from tying the world record 36 game unbeaten string in a FIFA sanctioned tournament knockout round match.

And if anyone wants to question how badly Spain wanted to win yesterday, I think the fact that more than a few Spanish players stormed off in a huff and didn't partake in the jersey exchange tradition goes against any theory that they were taking the game lightly.

And on that note, what is up with Spanish speaking teams reacting that way to losing to the US by a 2-0 scoreline?

The only downside to the match is Michael Bradley's red card in last 5 minutes of the match.

And after the game, Landon Donovan was looking ahead to the finals and at least one critic of Bob Bradley was offering up an apology.

Rhinos sign a forward and pick up a defender on loan

The Rhinos have signed former Atlanta forward Warren Ukah for the remainder of the season and picked up defender Ty Harden on loan from the Colorado Rapids.

Ukah has played in two matches for the Portland Timbers PDL team and scored 3 goals on 12 shots in 114 minutes of play this season. Ukah had been trying to earn a contract with the Timbers USL 1st Division team.

Harden has played for 34 minutes in 4 matches for the Rapids this season. Harden's one start ended in the 18th minute when he hurt his hamstring and Scott Palguta came in to replace him. Palguta hasn't come out of the starting lineup since and Harden has gotten in one match as a sub for Palguta.

Harden is on loan to the Rhinos until July 26th.

- Will Columbus be without Chad Marshall and Robbie Rogers on Tuesday as they have been called into USMNT camp ahead of this year's Gold Cup? I'm working on getting an answer to that very question.

- Former Rhino Kevin Burns is starting to impress in Columbus.

- With questions about whether Frankie Hejduk will play on Saturday versus the Red Bulls, I'd be stunned if he were in the Crew lineup here on Tuesday.

- The MLS stadium plan in Portland got a boost yesterday when the City Council approved a plan for an MLS stadium. But, this plan de-links the MLS upgrade to PGE Park and the building of a new home for the Beavers......

- Rossi to ManU and Jozy Altidore to Greece? Those are two of the rumors floating around. But, my favorite one is Thierry Henry to the New York Red Bulls in 2011.