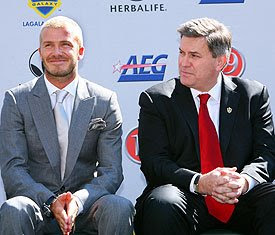 News of the World - It's Pay-Beck Time

This whole Beckham debacle has become my guilty pleasure.

While I believe that letting Beckham go would help the LA Galaxy on the field, I can also see why they don't want to sell him for $3 to 6 million from a business perspective.

It continues to be fun to watch both sides and the media bounce this around.

- The Rhinos Zone.com is saying that the Rhinos have signed midfielder Wilfrid Loizeau. He reportedly can play either outside midfield position, along with central attacking mid. He would appear to add depth where the Rhinos could use it currently as they do appear a light lean on wingers today.

- Nigel Henry, who's 2008 season ended with a bloody injury at PAETEC Park, has re-signed with Puerto Rico. The Islanders also signed T&T left back Kevon Villaroel.

- I don't know what is funnier news coming out of the Seattle-Vancouver friendly from over the weekend: the all green Seattle kit (OK, the socks are blue....) or the fact that it's named XBox Pitch at Qwest Field..........

- Jack Bell's NY Times soccer blog has a post saying that Barca is re-thinking the idea of buying an MLS expansion team and placing it in Miami. With the economic times that we live in, I'll be surprised if MLS can really get the prices they are asking for this round of expansion.

- I guess that's what you want to hear about your proposed venue: it won't be a disaster......

- Apparently a downtown stadium is key to Ottawa's MLS bid.

- I want to give Colin Helmer a straight red!

- I like MLS Talk's take on the Galaxy sans Beckham (and Donovan).

- Maurice Edu opted to stay with Rangers and fight for playing time as opposed to being loaned out. I honestly don't know if it's a good thing or a bad thing. On the one hand, I like the fire he shows. On the other, he needs to play.

- In case you didn't know, Charles Gbeke got married this off season. Congrats!