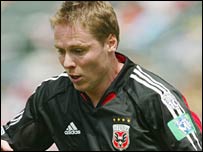 Steve Guppy has been named as a player/assistant coach for the Rhinos today. The left sided midfielder has had a long career with over 150 games played in the English Premiership, a stint with SPL giants Glasgow Celtic, and 5 games with DC United of MLS in 2005. Most recently, Guppy played the 2006-07 season with Stevenage Borough where he had 2 goals in 29 appearances.

With the Rhinos woefully short in the midfield and with the left side of midfield especially being wide open with Aaran Lines not being retained, it would appear that Guppy will get as much playing time as his 38 year old legs can handle.

Let's just hope that the FieldTurf at PAETEC Park doesn't wear the guy out!

- At today's press conference the Rhinos have announced that Soccer Sam has a major role within the organization. Legendary coach Dick Beal sent out a quick e-mail with the following "He has just been announced as being in charge of everything except soccer in the Rhino organization."

I need to polish up my resume!

- US Soccer.com has announced that the USMNT will take on Argentina at Giants Stadium on June 8th.

- Columbus isn't limiting the number of visiting supporters as Toronto FC is expecting to have over 2000 fans at this weekend's 2008 opener for the second year club.

- Bernando Fallas wonders if Houston should try and sign Omar Bravo as a DP.

- Goal.com looks at some of the lesser known new players in MLS that could have big on the field impacts in 2008.

- Real Salt Lake is still working on a naming rights deal for their new stadium.

- SI.com's Luis Bueno has a piece on how the DP rule has worked so far even though MLS has yet to lure a big name European star that is in their prime.

- Is Gooch back? I want to see him make the move to a higher profile league ala Michael Bradley to truly find out.